Heather is a senior accountant at PassageMaker. Fluent in Mandarin and English, Heather is always ready to consult the books and get invoices promptly issued. Heather’s experience with trading companies from Hong Kong, joint-ventures, foreign and domestic companies makes her very knowledgeable in the process of obtaining VAT rebates in China for our clients. Originally from Jianxi and a graduate of Yichun University, she is based in our Shenzhen office.

Aaron is originally from Hubei Province. He received a degree Mould Design & Manufacture from Nanjing Institute of Mechanical Technology. Before joining PasssageMaker Aaron worked as a Project manager at a plastic injection molding company. At PassageMaker he holds the position of Sourcing Engineer, responsible for China Sourcing. He is also Factory Manager (Buji Assembly Center) and Sr. Project Manager. Aaron speaks English and Chinese and is based in our Shenzhen office.

Mikel is comes to Passagemaker from San Sebastian in the Basque region, Spain. He graduated from Mechanical engineering in the University of the Basque Country in 2011. Today at Passagemaker, Mikel is an Account Manager specializing in the Spanish & Latin America markets. Based in Shenzhen.

Miguel comes to PassageMaker from the region of Galicia in Spain. He graduated from Electronic Engineering in the University of Vigo in 2013. His final career project was focused on quality and reliability of electronic components. Miguel also has IT experience in software and web development. As a native Spanish speaker, Miguel also speaks English, Portuguese, German and is learning Chinese.

Aline joins PassageMaker from Wallonia, Belgium. She is a recent graduate from the Solvay Brussels School of Economics and Management with a Masters degree in Business Engineering. Aline’s thesis was based on the fashion industry, but she also has IT and entrepreneurial experience from founding her own software company. A native speaker of French, Aline also speaks English and is learning Chinese.

Nicole comes to PassageMaker from Hunan province, where she studied at Hunan Industrial College. Before joining the team, she worked for four years at an American-owned plastic and hardware exporter, specializing in both merchandising and shipping. Nicole now lives in Shenzhen and speaks both Chinese and English.

Jessica joins PassageMaker from Hunan province. She graduated from Hunan College of Information with a degree in international trade, and worked in purchasing for two years before joining the team.

Betty comes from PassageMaker from Guangdong Province. She graduated from Guangzhou Vocational college of Industry and Commerce with a Major in Tourism English, and used work in trading company for houseware and gift products exporting to retailers like ASDA and Tesco, familiar with UK and US market. Since June 2015, she works on the project team at PassageMaker.

Alina is a native of Chongqing in Western China. She graduated from Chongqing Institute of Engineering Technology in 2002, and joined PassageMaker in May 2011.

Bruce is originally from Jiujiang City in Jiangxi province. He received his degree in Electronic application from Guilin Electronics College and has over 8 years of QC and QA experience. At PassageMaker Bruce is in charge of overseeing all QA operations at the line level in our assembly/inspection center. Bruce speaks English and Chinese and is based in our Shenzhen factory.

With 15 years of production management experience, Qiming joined PassageMaker in 2007. Originally from Changde, Hunan province, Qiming lends his vast experience to our company, making sure assembly meets the highest standards of quality and production remains efficient. Currently based in Shenzhen, at our Buji Assembly Facility.

In the logistics department, Penn works to ensure smooth importation of raw materials and efficient exportation of finished goods. Penn has been with PM for over a decade and was previously employed at the Port of Yantian. Originally from Hunan province. Educated at Hunan Broadcasting Television University, he is now based in Shenzhen.

Peter works as a quality engineer at Passage Maker based in our Shenzhen factory, comes from SHAN XI Province. He graduated from HuBei university, holds degree of Mould design and manufacture. Before joining Passage maker, he worked in a toy manufacturing company.

Echo joins PassageMaker from Hunan province to the north. She is a graduate of the Hunan Institute of Engineering, and provides expert assistance to our logistics branch. Based in Shenzhen.

Ivy, from Anhui province, graduated from Anhui Electronic Vocational Institute of Information. At PassageMaker, Ivy is an accountant who is primarily responsible for the company’s financial accounts and export data processing.

Nicole was born and raised in Guangdong Province, and speaks both Cantonese and Mandarin. She obtained a bachelor’s degree in accounting from Shaoguan University, then joined the PassageMaker accounting team in 2011. Based at our Liantang office in Shenzhen.

Anne joined PassageMaker in April 2013. She is from Anhui province and graduated from Anhui Electronic Vocational Institute of Information. At PassageMaker, Anne works with our accounting team and is mainly responsible for company reimbursement and financial accounts.

Yun joined PassageMaker in June 2010. She used to work at two large electronics company, where she has accumulated rich experience in product testing, and using most testing equipment. She is from Qianjiang city, Hubei province. At PassageMaker, Yun works with our QC team and is mainly responsible for supplier quality control.

Luo Hui originally from chongqing municipality, graduated from Sichuan Institute of Technology, major in computer information management. He comes to Passage maker in 2010, now work as production engineer (PE). Meanwhile he also act as company safety officer, based in our Shenzhen factory.

Huaibin brings over 10 years warehouse management experience with three large companies to PassageMaker’s Buji Assembly Facility. A native of Tuocheng county, Henan province, Huaibin received his education at Tuocheng Technical School. Huaibin is responsible for making sure all shipments are received from the supplier, inspected thoroughly, and shipped out to the appropriate destination. 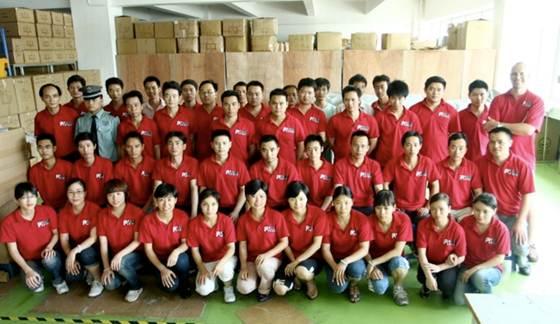