ChinaSMACK, one of my daily guilty pleasures, has an article about the Chinese netizens’ reaction to Mark Zuckerberg’s Chinese-American girlfriend. The consensus seems to be that she’s an egregious porker. And in most parts of China, she’d be seen that way, as a woman is supposed to look like a stick of bamboo. I’ve written before about this phenomenon, including a research trip to Shanghai Hooters. The sacrifices I make for science.

I am not going to comment on whether I find Miss Chan attractive or not, as beauty is highly subjective, whereas weight is (mostly) objective. Indeed, a woman can wear weight well or know how to dress her body (Kate Winslet comes to mind), but at the end of it, weight is measurable, whereas beauty is not. I assume that when you’re worth US$4 billion and founded the 3rd largest “nation” in the world, meeting girls is not a problem. Mr. Zuckerberg thinks she’s hot, and that’s what matters.

But I will say clearly that she ain’t fat. Give the poor girl a break.

I find this all interesting and worthy of commentary because the Chinese diet has changed so radically with the prosperity of the last 30 years, that seeing a little extra weight on women is pretty common in the cities. Listening to chatter on the streets, much air is spent bemoaning how fat so-and-so is now. Fat, as in 105 lbs versus 90 lbs. They are also 3 inches taller than their parents because they’ve had abundant food and animal protein their whole lives, and now have a discernible figure. To me this is a good thing.

It has long been considered attractive in China for a man to have a few extra pounds, as it is a sign of wealth. In a nation with a long history of famine, calories were the ultimate bling. But women were supposed to stay skinny.

Since I do not see China’s economic trajectory reversing, it will be interesting to see how the Chinese physique changes in decades to come. We know what’s happened in the USA, and India seems to be traveling a similar path (sorry – old article). Even more so to see if the cultural biases change to match the new reality. Should be fun to watch. 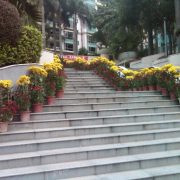 China steps up, slowly but surely

Setting up an exclusivity agreement with a China supplier
0 replies