Twenty years ago today the Berlin Wall fell. I remember being in joyful shock, not entirely sure what it meant, but knowing that it was good. My parents remember where they were when JFK was shot; I remember the juxtaposing endpoints of the Cold War in 1989 – the political repression of Tiananmen in June (later followed by the economic freedoms that have created the modern China), and the collapse of the Evil Empire that began with the fall of the Berlin Wall.

1989 was indeed an amazing year to be alive. Ross Douthat has an excellent op/ed in today’s NYT (free registration may be required):

For most of the last century, the West faced real enemies: totalitarian, aggressive, armed to the teeth. Between 1918 and 1989, it was possible to believe that liberal democracy was a parenthesis in history, destined to be undone by revolution, ground under by jackboots, or burned like chaff in the fire of the atom bomb.

Twenty years ago today, this threat disappeared. An East German functionary named Günther Schabowski threw open his country’s border crossings, and by nightfall the youth of Germany were dancing atop the Berlin Wall, taking hammers to its graffiti-scarred facade. It was Nov. 9, 1989. The cold war was finished.

There will be speeches and celebrations to mark this anniversary, but not as many as the day deserves. (Barack Obama couldn’t even fit a visit to Berlin into his schedule.) By rights, the Ninth of November should be a holiday across the Western world, celebrated with the kind of pomp and spectacle reserved for our own Independence Day.

Never has liberation come to so many people all at once — to Eastern Europe’s millions, released from decades of bondage; to the world, freed from the shadow of nuclear Armageddon; and to the democratic West, victorious after a century of ideological struggle.

Never has so great a revolution been accomplished so swiftly and so peacefully, by ordinary men and women rather than utopians with guns.

Twenty years later, we still haven’t come to terms with the scope of our deliverance. Francis Fukuyama famously described the post-Communist era as “the end of history.” By this, he didn’t mean the end of events — wars and famines, financial panics and terrorist bombings. He meant the disappearance of any enduring, existential threat to liberal democracy and free-market capitalism.

This thesis has been much contested, but it holds up remarkably well. Even 9/11 didn’t undo the work of ’89. Osama bin Laden is no Hitler, and Islamism isn’t in the same league as the last century’s totalitarianism. Marxism and fascism seduced the West’s elite; Islamic radicalism seduces men like the Fort Hood shooter. Our enemies resort to terrorism because they’re weak, and because we’re so astonishingly strong.

Starting in 1993, my family company began a relationship with an excellent plastics company in Plzen, Czech Republic that lasted for 12 years. I had the pleasure of visiting Czech that year when Prague was still new to the West, and had I not visited Singapore and China the next year, I might have made a career in Europe. PassageMaker now has a growing sales presence in Europe, led by Marc Brzezinka and Julien Roger (Managing Director of our sister company China Quality Focus), and we expect to have at least one rep based in Eastern Europe soon.

I occasionally hear commentators in the USA talk about “Communist China”. While China is a one-party state, I have a good laugh whenever I hear that. China today is more capitalist in many ways than the USA, and Shenzhen, our corporate home, is the most capitalist city of all. While the marriage is imperfect, the relationship between the USA and PRC is nothing like the Cold War, and thank God for that. 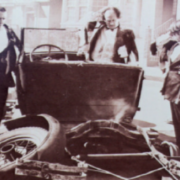 Stay out of jail by navigating product safety in China!

The importance of food (and drink); or learning to love Pig Brain Soup