I have often said that commentators in the USA are woefully uninformed when they talk about “Communist China”. This article in Slate by Daniel Gross is as good an example as any of the shock of first time visitors to China. The little red books are sold as souvenirs now, but no one reads them. China is assuredly a one-party state, but it is not communist.

I am of the mind that China is the first modern fascist state. Fascism has a rightly deserved bad name, but I believe the label fits. It is a one-party, statist model, using large government-owned entities to promote ‘critical’ industries like steel, aluminum, cement, etc., but allows a substantial amount of economic and personal freedom. It grew out of a Leftist movement (as did Italian and German fascism), but after the initial gruesome ideological violence, has mellowed to promoting the economic and military aspirations of the nation on a largely rational basis. As with the early “trains-run-on-time” iterations of European fascism, it has many supporters, who see it as the practical form of government.

Whether my political science is correct, it is clear that the Chinese Communist Party is only a label. The CCP now recruits the best students (not the most politically correct ones) from the elite schools in the hopes of building a solid governing class who can ensure the future prosperity of the country, a la Singapore. While I would prefer the democrat model as practiced in Taiwan, Singapore is a rather nice place and it’s hard to argue with their success. The trick is adapting a model that works well for 3 million folks to a country of 1.3 billion. Heck, the trick is adapting any model of government to a country of 1.3 billion people. 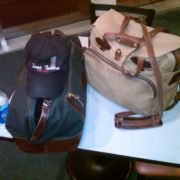 The 60th anniversary of the PRC

Accept Defeat: The Neuroscience of Screwing Up
0 replies

China, gold, and the civilization shift Further thoughts on “Karl Who?”
Scroll to top